NEORN is delighted to report that the first NEORN Passenger Rail Summit was a huge success. It was well attended with over 120 people, 24 speakers and was covered by all of the local media (see their coverage in the links listed below).  Presentations were made by Chief Paul Syrette-Garden River FN & Chief Jason Gauthier – Missanabie Cree FN.  Present were mayors (Mayor Roger Sigouin – Hearst, Mayor Sue Jensen – Blind River, Mayor Lynn Watson –Macdonald, Meredith & Aberdeen Additional Township (Echo Bay) and Mayor Christian Provenzano – Sault Ste. Marie). Also in attendance were government officials from Ministry of Northern Development & Mines and senior leaders of UNIFOR. 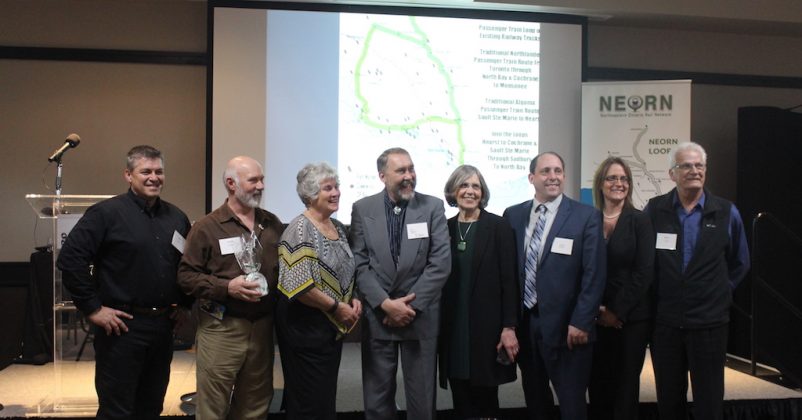 A few of the
Speakers for the Rail Passenger Summit!

Mayor Provenzano posted this comment on Face Book later in the day:

“I want to thank the Northern and Eastern Ontario Rail Network – NEORN for organizing a Passenger Rail Summit held today in Sault Ste. Marie. It was a well attended event, and I was grateful for the opportunity to speak. Transportation is fundamental to the health and sustainability of Northern Ontario. Transit options such as passenger rail service provide access to towns and cities located throughout the region, contributing to an improved quality of life for citizens and facilitating the movement of visitors to our region.

A transit system connecting Northern Ontario needs to be in place, and NEORN’s proposed North Eastern Ontario Rail Loop could address this situation by providing access to communities, First Nations, businesses and the people of Northeastern Ontario to the rest of Canada.

Government subsidized passenger rail service is provided by governments across the world and right here in Canada, and it needs to be provided once again to our area.
As Mayor, I remain committed to providing assistance to NEORN, Coalition for Algoma Passenger Trains, Committee Promoting Muskoka Rail Travel – CPMRT and
Mask Wa Oo Ta Ban – Bear Train to advocate for passenger rail service in Northern Ontario.”

The following politicians attended. (Their answers to NEORN’s questions will be posted on the websites):

Written submissions were also provided by:

A video of much of the summit will soon be posted on the NEORN, CAPT and CPMRT websites.

A huge expression of gratitude goes out to all of the volunteers, sponsors and contributors.  They will be listed very soon on our websites.

Building on the momentum at the summit, prior to the provincial election, we will be holding meetings in many of the communities along the NEORN loop.  The dates will be announced soon. Please stay posted.

NEORN, CAPT and CPMRT are non-partisan. We want all politicians and political parties to support the NE Ontario Passenger Rail Loop because of the socio-economic and employment values it will support.

If anyone knows of a political event in the rail loop please let us know and we will pass the word. That way our followers might choose to attend those events to present our urgent need for restored passenger train service.

Train passenger summit in Sault Ste. Marie aims to get service back up and running Apr 19, 2018 CBC Radio Up North
http://www.cbc.ca/news/canada/thunder-bay/programs/upnorth/train-passenger-summit-in-sault-ste-marie-aims-to-get-service-back-up-and-running-1.4627316